Web design is an art. Great web design occurs when design and content are seamless and you don't notice its greatness. With great web design, it's easy to find the information you need. The content makes you want to return again and again and, most importantly, great design gives credibility to the company/organization.

We have some more examples of classic bad web design and I've included, as a bonus, the best commentary to appear on the site during 2008. I bow down before this person's genius.

6. Camera Corner Connecting Point (They have fixed the site)

This is another one of those ideas that must have seemed brilliant during a meeting because everyone was on LSD. When I say “brilliant,” I mean “bright” not “highly intelligent.” It was “bright” because the acid had just hit and they were seeing fluorescent colors.

If you go to a sub-page and then come back to the home page, the guy starts talking all over again. Does anyone at the company realize how annoying this is to a normal human being? This is stupid. It’s the web equivalent of not knowing Africa is a continent.

Other comments #2: The creepy home page guy leaves me agog. It's beyond belief that someone thought that was a good idea. I disabled Javascript and Flash so that I could look at the site without creepy homepage guy getting in my face — and then the featured products and other stuff in those right-side boxes were....gone.

Here's a high-quality video showing the home page in all its glory.

Maybe one of the reasons Yahoo! is sucking so much air these days can partially be attributed to their SiteBuilder product. Initially, I thought the home page was created with (Af)FrontPage, but I was wrong. I’m not wrong when I say this site sucks.

It’s a classic example of Mistake #6 from Biggest Mistakes in Web Design 1995-2015 — “Have you ever seen another website? Really? Doesn’t look like it.“ I call this type of design the “I haven’t taken my antipsychotics in a while school of web design.”

Other comments: Whoopee! My two pet hates together in one convenient place: music I can't turn off and a cursor with a tail. It's unprofessional, dated and, well, sucky. 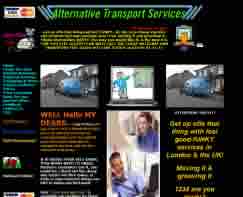 I don't think I've ever seen the word "darling" used so many times on a site that wasn't about punters (an homage to my readers in Great Britain).

I also love the page title, "Cheap Student Removal Company." Gosh, do they get rid of cheap students?

Submitter's comments: Animated GIFs, two of the same image viewable at once, marquee tags, using colored text for emphasis, and then very similar colored text for links (seems to be left justified and not centered on my wide-screen monitor as well but whatever).

I suppose you can navigate from the table on the left…if you can stop being distracted by the rest of the page long enough to look at it. They also seem to have what amounts to the exact same information three times in plain view of one another (hint: they all are colored, enlarged, and bold "Hi Darling").

In fact I'm pretty sure this page has created an 8th deadly sin…though I'm not sure what to call it. 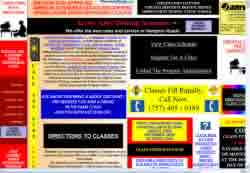 If you're prone to seizures, I'd stay away from this site — especially stay away from some of the subpages. I'm guessing that while this company provides classes, they're basically one, big advertising site for other driver-related companies.

The site lacks any kind of focus and it's so bad, I'm not even sure about the name of the company. The View Class Schedule link takes you to a page that's wider than my 1152 x 864 pixel monitor, which causes the dreaded horizontal scrolling effect.

The site is a car crash on the Information Highway (pun intended). It needs to be nuked and redesigned. 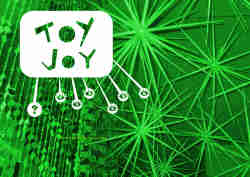 NOTE: The site is being "fixed." They can run, but they can't hide. See "Vincent's comments and the video below."

So…what's the point? Actually, I wouldn't be surprised if they just wanted to break my brain.

Vincent's comments: One of the main reasons I don't keep an archive of badly designed websites is most websites go through a redesign process. The following video shows you what the site looked like when it qualified as #10. 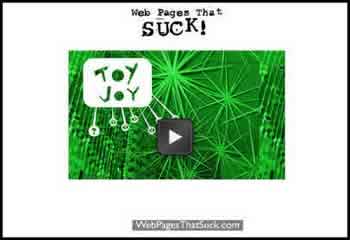 Submitter's comments: Toy Joy's a really weird store in Austin that sells all kinds of toys and other goofy novelties. It's a bit of a disjointed place but, hey, if you want tons of fake fish, dashboard hula girls, or giant fake bats, it's the place to go.

To some extent I can understand having an equally crazy layout, but it's not as crazy as it is just plain terrible. It's a garish green background with white Mystery Meat Navigation. Ow. No contrast at all. I think all the numbers just lead to QuickTime VR tours, which is interesting considering that while there are generally some themed areas that rarely move, I'm pretty sure the store layout has shifted since the site was put up four years ago. That, of course, isn't really taking into account the obvious fact that it requires you to have the proper plug-in to view everything. 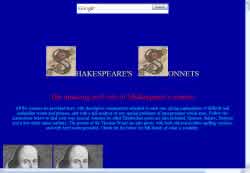 Vincent Flanders’ comments: While the site sucks and deserves to be included in a secondary list, what really stood out were the qualities of the comments the submitter supplied. My readers are very intelligent and there were hundreds of great comments this past year, but the comments for "The amazing website of Shakespeare's Sonnets" are outstanding. Most of mine were "out standing in the field."

Submitter’s comments: My suggestion for the Daily Sucker is “The amazing website of Shakespeare’s Sonnets:”

Shall I compare this to a train wreck now?
Its whole design all logic doth defy,
The text and background colors I avow,
Make train wrecks easier upon the eye,
Sometimes the text is centered on the page,
While images are upon the left arrive,
Though such design was one time all the rage,
That time, we know, was nineteen-ninety-five,
The page provides advice on how to view,
(For those who do scroll down enough to see’t),
And those, I fear, shall number very few,
Who will for long enough abide such shee’t,
But long as tools like PageMill do exist,
Web sites that suck like this will still persist.

Here's a screen capture of the full page (6Mb) and here's a compressed image.